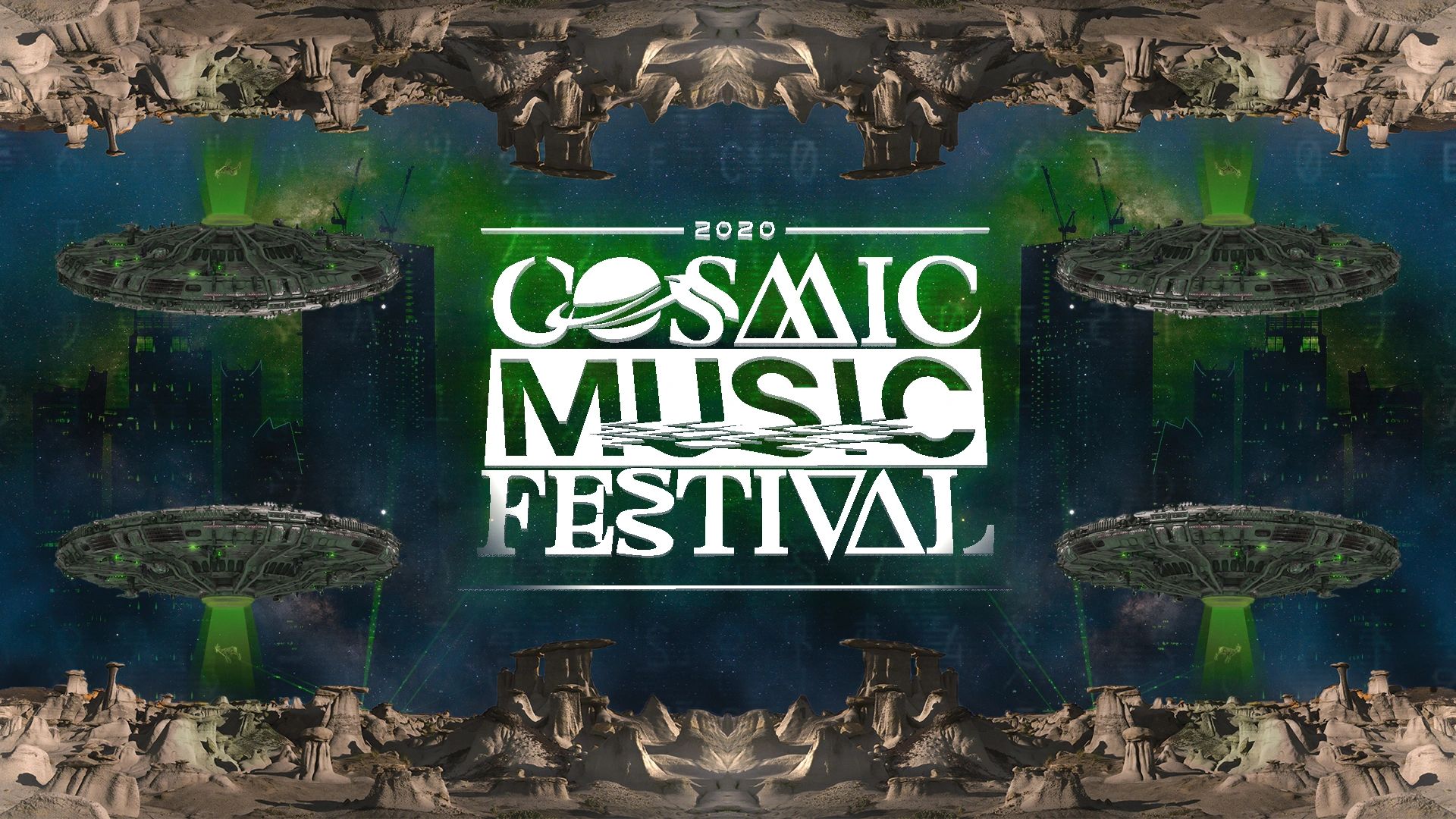 Formerly known as Cosmic Bloom, and from the creators of Audio Bend, we promise you yet another great festival with multiple glowing stages of music, lots of live painters, art, lights, lasers ,special visual effects and happy people!

Save your cash for gas

Save your cash for gas

Cosmic is always a mad decent price yo.

"We come in peace! Cosmic Music Festival landed in downtown Phoenix last Saturday and brought plenty of otherworldly vibes with a space-centric soundtrack including psychedelic space rock, hypergalaxy hip-hop, planetary progressive trance and extraterrestrial electro. Of course there was also a whole galaxy of cosmic snacks, art, fashion and fun." All photos by Michelle Sasonov.

New times has a thing for our shows as well

Here is a link to the page where they featured us as one of the  great upcoming festivals this year: https://www.phoenixnewtimes.com/music/phoenix-music-festivals-spring-2020-11432608 ,

Holy f#$% that was outstanding

So glad to come out last night! Really awesome setup and location it was magical. Thanks for making my birthday super fun everyone 👽

Cosmic was nothing short of amazing! Great location, music, vendors- everything about it was memorable 💓💓

The music, vendors, attendees and much more! always such a great experience!

So far we are featuring

"My name is Michael Garfield and I'm a paleontologist turned podcast host, artist, author, singer-songwriter, philosopher, and educator helping restore some freakin' soul to our discussions of the future. I'm the host of Future Fossils Podcast, the pioneer of cyberacoustic guitar, a fourteen-year veteran of scientific illustration and live painting, an essayist and public speaker, and the author of How to Live in the Future – a book-in-progress on tech, evolution, art, and consciousness.  I also teach about transformative technologies and how to surf the wave of change brought on by tools like blockchain, AI, VR, and biotech."

NYS is an aggressive bass music culmination of a classically trained pianist and a street trained badass accompanied by eccentric visual art.  From Burning Man to Ultra Music Festival-these trashy non shadows get around.

Collidoscope was booked for the original date in March 2020 but are unable to make it for July 2020, If everything aligns properly, they plan on being at our following show instead, and are a band formed on the perpetual desire to bring something new to the table. In a landscape of producers saturated with the perfunctory “Live Band”, the trio strives to take risks where others don’t. Whether it’s the rotating cast of guest musicians, the seamless blending of genres, or the healthy dose of improvisational jamming woven in to every set, the band has a clear mission: to make every show unique—a one time experience that leaves the listener hungry for the next one.

M3NACE brings his own signature touch to his music not only through professional production prowess, but through his voice, too — M3NACE writes his own lyrics and raps on his tracks, separating him from the pack of up-and-coming producers around him. Expect to feel on top of the world when you step into M3NACE’s realm: hard beats, unique lyricism, and spreading your love to the world is the name of his game. Some highlights throughout his career include his original track “MAKE IT SHAKE” and remixes of Slander and Dylan Mathew’s “Love Is Gone” and Excision and Sullivan King’s “Wake Up,” offering a fresh take on each iconic tune.

Gordo is unable to make the July date but has expressed interest in future shows.

"Using a technique known as live looping, I essentially build my songs one instrument at a time by playing and recording each part, then "looping" them back, allowing me to then overdub the next instrument and vocal parts as I perform and "build" the song.

From 1999 - 2011, Cinematic Manipulation began his journey in music under the name DJ Question?. After seeing video manipulation turntablist, Mike Relm, open up for Blue Man Group in 2011, he was inspired to work with video and music. Thus, VJ R-M8E was born!


After changing his name to VJ R-M8E in 2011, he had truly found his passion of combining video and music into one live performance. He calls this "Cinema Electro", which is a perfect blend of fusing audio and video mixed live! In early 2013 VJ R-M8E started creating live songs by mixing nothing but movie clips as instruments. August of 2015, VJ R-M8E hung up the videos and headphones for a short hiatus to start taking things to the next level!


Summer of 2016, he started working on new material and taking it to a whole new level! He could of come back with the old VJ name, but wanted to start back up under something new... something never seen before... something that is way before it's time... something called Cinematic Manipulation!

We are hoping to still bring this act out for July. If needed they will be on our radars for future events .

Born and raised in the city of Phoenix, AZ.. Dylan Gunn (SunnRays)..Moved to Summit County Colorado at the age of 21 (2012) to begin his career path with a friend as "Transfer Station". Traveling and performing through out CO, AZ, and CA. .Transfer Station began to perform with artists like TURKUAZ, SUNSQUABI, MARTY PARTY, SO DOWN, MUZZY BEAR,UNLIMITED ASPECT, and festivals such as Fire Fly Gatherings in 15' and the UNTZ 16'.. Soon after, both artists began separate projects, developing and reaching the inner most in what they creatively saw as musicians/artists individually. Dylan Gunn, now SUNNRAYS.. is an Instrumental form of song writing with an Electronic/Hip Hop or Trip Hop aspect. Dylan a self taught Guitar player, ranges various genres through his production and is mostly directed by his guitar layering.


Recently, from Denver, CO.. Dylan currently lives back in the area of which he grew up..Glendale, AZ, now at the end of the year of 2017..


" SUNNRAYS.. It's a formulation of progression that stimulates the mind with melodies pure and beautiful, while simultaneously inspiring dance".

Owner of Discombobulated Funk Productions, Lyzz-E is a Wisconsin native who learned playing on vinyl and has had a passion for Hardcore and all genres since 1999. Now she brings UK Hardcore, Hard Psy, & Powerstomp sets to AZ, playing all over the state. Representing the Hardcore Outcasts, she murders 180bpm and gets the walls shaking and bodies pumping with powerful energy. Recently, Lyzz-E began her producing journey, bringing some original tracks to her sets. Not one to forget her roots, she will always throw down an old banger with every set that’ll make you remember why it was you started raving to begin with! Get ready for a banging set because Lyzz-E packs a beat like a punch to the face that will have you asking for more!

"Welcome to dnb , pls feel free to comment, post pics or message me for booking info and contract request. Always a fan of the underground sound"

Starting from humble origins in the Midwest, BB GALLI moved to Arizona in 2011, where she quickly became immersed in the underground music scene. Although she has just recently started delving into the world of DJing, she has been creating quite the buzz recently! She has been developing her skills from being the quintessential "bedroom DJ" and aspires to bring her eclectic mix of house grooves to the dancefloor.

Much more TBA! Also, if you were already booked & do not see yourself listed, you will be soon.

We hope you all enjoyed our site and take a moment to drop us a line.

Q: Can we expect a good time?

A: You can absolutely expect an excellent time!

Q:How many people show up?

Q:Will there be cosmic vibes?

A: You will always feel the eternal cosmic vibes.

Check out this great video by Ben Ridgway- yes there is no "e." Below you can also view one of the stages @ CMF 2018, the CMF 2019 aftermovie and a most excellent video by TAS visuals

Drop us a line!

Better yet, see us in person!

We would love to meet you<3